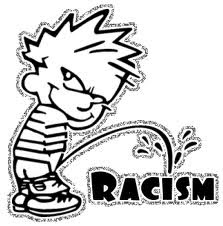 What’s a PS stand about racism?

PS… I assume this refers to Psychopath and Sociopath. If yes, then there are two slightly different answers.

I’ll begin with the group that is closest to home, and of which I am a specimen: The Psychopaths…

If there was such a thing as a pure psychopath, he would be incapable of acquiring any ideology, politically or otherwise, and that includes Racism.

The core trait in psychopathy, and which sets us apart from other Cluster B. and Antisocial personality types, is the Flat Affect, specifically in terms of absence of the ability to feel Empathy and therefore Remorse(1*).

If you cannot empathize with individuals or groups of other people, you only have logical thinking upon which to base your views. In the case of racism, as with more or less everything in existence, there are pros and cons. I see by far more cons, pronbably because I have acquired some fundamental empirical modern scientific knowledge.

As an example, I think the science of neuro-biology is highly efficient because it fits with all the other natural sciences that I know of. There is too much that speaks against the usefulness (read: possible truth) of a model of reality that says the race defines possible intelligence level and the ethical nature of personality traits in the individual human being.

It is far more useful to stick with the empirical model of natural science which gives us an enourmous amount of data to gain more general knowledge derived from physical differences of every kind. This has given us tools to deal with illnesses and epidemics which used to be deadly – and as we know, these fiends do generally not care about racial differences. Another positive is there’s one less synthetic internal conflict to make basis for civil war or revolution. Most of all, we will have far more people who can function based on their personal strengths and preferences instead of their racial heritage.

All of the above are thoughts I can’t help but believe in, because my world model has it logically built-in and structured that way.

On the other hand, the emotional aspects of my thinking is almost non-existent. The basis of my ideology is survival. Survival of our species, yes, but our species always begins with me.
And I know mankind is more than logic, I see it everyday. I see it in that most people don’t function by logic alone, and many develop a racist ideology in spite of scientific schooling.

If I find myself surrounded by a society that has a racist ideology, I’m likely to use it to my advantage even if it means I will have to lie about what I really think. In fact – and this is where my psychopathy comes in – it is even worse: I may live in a society where the racial ideology agrees with my own thinking, but if I see a Prize of Gratification, but I can obtain that prize only by pretending that I believe in racism, then I am likely to do so.

Sociopaths(2*) are more likely than psychopaths to acquire a racisist ideology because they are much more likely to adopt the ideology of a social group, but they do it for very different reasons. Because many sociopaths join extremist political minorities, there are quite a few sociopaths among neo-nazi extremists and other racist groupings. Psychopaths almost never thrive in these groups because of their strict hierarchy systems and their very harsh demand for loyalty.

This can sound as if sociopaths are incredibly negative, but lets turn it around and think of another example: In most prisons the sub-cultural code makes rapists very unpopular – no, hated and despised. And it is beyond doubt that sociopaths hate or despise these outcasts just as much, if not more, than the neurotypical groups of inmates do.

There are two small minorities in the prisons who do not hate and despise rapists:

(1*) – Some scholars put more emphasis on the factor of Absence of Remorse. I haven’t been able to do so myself because I can’t understand the importance of Remorse, and I think this feeling, or emotion, depends on the ability to feel Empathy.

(2*) – I should add that what I write about the differences between Psychopaths and Sociopaths are my personal opinions, though not mine alone (ref. Dr. Robert D. Hare, David T. Lykken, and others).
psychopathicwritings